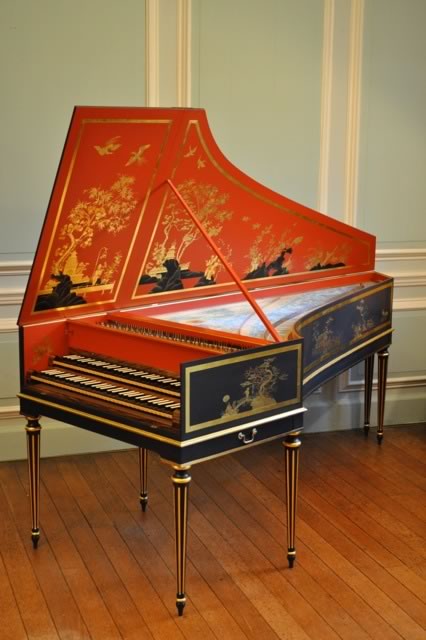 Raynham is hugely fortunate to have such a ﬁne harpsichord from the eminent Norwich builder, Alan Gotto. As a player, the sound and action are of course the most important elements and this instrument is quite simply a dream to play. It has beautiful, clear registers, a reﬁned action and an exuberant sound which matches the wonderful decoration both inside and out.

When I was first approached by Alison about the possibility of making her a harpsichord there were two important questions to address. Firstly, what particular model of harsichord would appeal and be most suitable for recitals. and how should it be decorated.

Initially, Alison was completely smitten by the tone of an instrument based on a Goermans/Taskin harpsichord but weighing that preference against another double-manual instrument capable of rendering a wide range of repertoire, we agreed to base the instrument on a 1716 harpsichord by Pierre Donzelague, who worked in Lyons at the beginning of the 18th century.

After some discussion, and looking at various decorative possibilities, Alison soon came to the firm decision that chinoiserie had the charm and adaptability of fitting in with most decors, whether it be William Kent splendour at Raynham or a low beamed cottage should that be its fate later in life. Continuing this Chinese theme, Alison was keen to have a Chinese dragon depicted on the soundboard.

Angie Maddigan, in Sheringham, had previously executed a chinoiserie scheme for me, and she was commissioned to undertake a scheme on black and red ground for the case and lid of this instrument.

The choice of artist for the creation of the Dragon on the soundboard took a little longer. After approaching two other artists I knew, without definite result, I decided to contact Maggie Bevan, who had, over many years, decorated a considerable number of soundboards for me. Knowing that her health was failing, I nonetheless telephoned her to put the idea of the dragon to her. By a wonderful coincidence, she had been studying the picture of a water dragon which seemed to fit the bill as Alison had wanted to use an antique Imperial silk gown as inspiration for the soundboard This was taken to be a good omen, and she readily agreed to undertake the project. After much research into the historical depiction and meanings of dragons in Chinese art, (their posture, colouring, the number of toes, the chasing of the Pearl of Wisdom, the guarding of treasure) Maggie met with Alison, and a spectacular Dragon was created on the soundboard, along with the stylised depiction of sea waves. 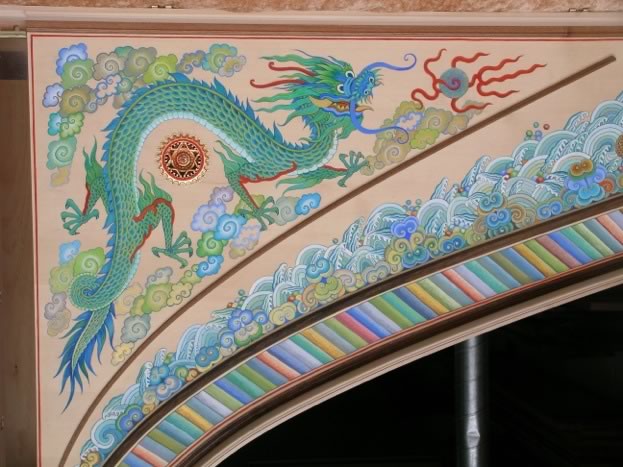 The harpsichord has the standard disposition of an 18th century French harpsichord, with two keyboards, three sets of strings (two at unison pitch, one at octave pitch), and a buff stop. The two keyboards can be coupled and uncoupled at will. Donzelague is believed to have been the first maker to incorporate a full 5 octave compass into his instruments, from 1709, which became the standard compass for all large instruments thoughout the 18th century. The natural keys are covered with ebony, the sharps are ebony topped with a slip of bone.

The construction began in early 2010, with the soundboard receiving its decoration in April and May. The instrument was completed in November 2010, and moved to the Hall in time for its inaugural concert in October 2013.